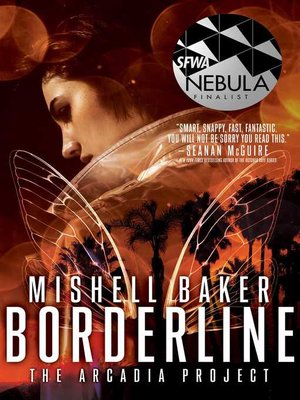 FantasyFictionMysteryScience Fiction
A cynical, disabled film director with borderline personality disorder gets recruited to join a secret organization that oversees relations between Hollywood and Fairyland in this Nebula Award–nominated and Tiptree Award Honor Book that's the first novel in a new urban fantasy series from debut author Mishell Baker.
A year ago, Millie lost her legs and her filmmaking career in a failed suicide attempt. Just when she's sure the credits have rolled on her life story, she gets a second chance with the Arcadia Project: a secret organization that polices the traffic to and from a parallel reality filled with creatures straight out of myth and fairy tales.

For her first assignment, Millie is tasked with tracking down a missing movie star who also happens to be a nobleman of the Seelie Court. To find him, she'll have to smooth-talk Hollywood power players and uncover the surreal and sometimes terrifying truth behind the glamour of Tinseltown. But stronger forces than just her inner demons are sabotaging her progress, and if she fails to unravel the conspiracy behind the noble's disappearance, not only will she be out on the streets, but the shattering of a centuries-old peace could spark an all-out war between worlds.

Mishell Baker is the author of the Nebula Award–nominated Borderline, which was also a Tiptree Honor book, as well as the second and third books in The Arcadia Project, Phantom Pains and Impostor Syndrome. She is a 2009 graduate of the Clarion Sci...

More about Mishell Baker
Borderline
Copy and paste the code into your website.
New here? Learn how to read digital books for free