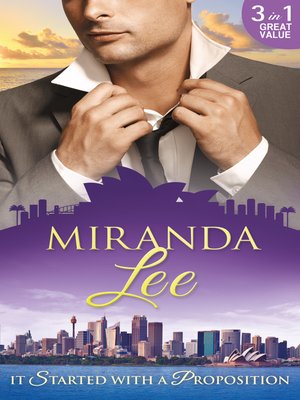 It Started With a Proposition

Blackmailed into the Italian's Bed / Contract with Consequences / The Passion Price

FictionRomanceShort Stories
Blackmailed into the Italian's Bed Jordan had struggled to forget arrogant, sexy Italian Gino Bortellio. Years later, Jordan still craved Gino's touch... Now he was back! Older, richer and determined to have her in his bed again... Contract with Consequences Scarlet King longs for a baby. Successful, spine-tinglingly gorgeous John Mitchell has desired Scarlet for years, so seizes his chance. But his proposal has a devilish price: if she wants his baby, they'll do it the old-fashioned way! The Passion Price Jake Winters has an edge of danger about him, even though he's a successful, wealthy Sydney lawyer. He comes back into Angelina's life and their intense sexual attraction is still amazing. Can Angelina keep her secret...?
FictionRomanceShort Stories

After leaving her convent school, Miranda Lee briefly studied the cello before moving to Sydney, where she embraced the emerging world of computers. Her career as a programmer ended after she married, had three daughters and bought a small acreage...

More about Miranda Lee
It Started With a Proposition
Copy and paste the code into your website.
New here? Learn how to read digital books for free