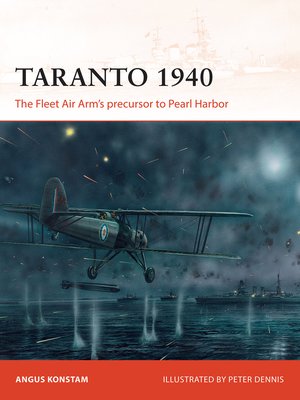 HistoryMilitaryNonfiction
The Royal Navy's attack on Taranto in 1940 heralded a new age of warfare. It was the decisive moment in a struggle for dominance of the Mediterranean that had gone on for months, as the British and Italian navies both looked to secure maritime supply routes for their colonies. With the enormous demands of a global war beginning to tell, the British capital ships were simply too thinly spread for a large fleet action against Taranto, where the bulk of the Italian fleet lay menacingly. How was the Royal Navy to eliminate the threat of the Regia Marina? This is the story of one of World War II's most devastating raids, recounting how a handful of obsolete Fairey Swordfish biplanes swooped in and destroyed an Italian battleship and badly damaged two more. With expert analysis, detailed colour illustrations and a gripping narrative, this book explains the origins of the attack, its planning and execution, and what happened in the aftermath.
HistoryMilitaryNonfiction

Angus Konstam hails from the Orkney Islands, and is the author of over 100 history books, 60 of which are published by Osprey. This acclaimed author has written widely on naval history, from Sovereigns of the Seas and Piracy: The Complete History ...

More about Angus Konstam
Taranto 1940
Copy and paste the code into your website.
New here? Learn how to read digital books for free