Her Wicked Heart (The Cunningham Family #3) 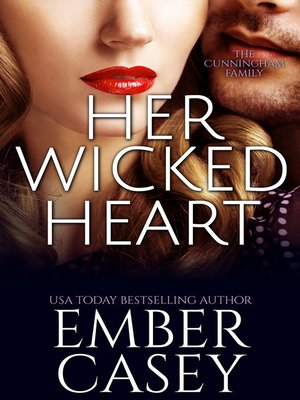 The next sizzling installment in the Cunningham Family series by USA Today bestseller Ember Casey...

Lou just needs someone to take her away. It doesn't matter if she knows his name. Or if he knows hers.

Actually, it's better if he doesn't know hers.

At least that's what she tells herself when she's sticking her tongue down the throat of the sexy handyman she just met at her new job.

Her father's dead. Her family's fortune is gone. And, oh yeah—she's assumed a false identity so she could get a position at Huntington Manor, the luxury tourist attraction that was once her family's estate. Nobody here knows that she's Louisa Cunningham, former heiress and current complicated head case. To them, she's just Addison Thomas, assistant to the hotel's General Manager.

Well, except to handyman Ward Brannon—to him, she's the strange but intoxicating new girl who tried to have sex with him without even knowing his name.

Ward is everything Lou knows she should stay away from. He's a playboy. He's constantly getting in fights. And he resents her family for reasons she doesn't understand. But in spite of herself, she can't stay away from him, even when that puts her secret at risk. Even when it becomes increasingly clear that he harbors a few secrets of his own...