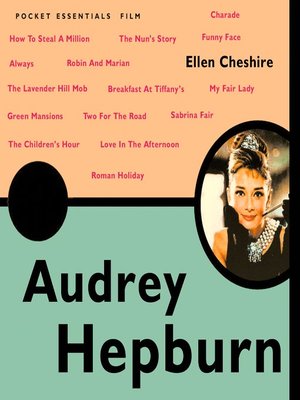 Audrey Hepburn: an enduring screen legend and one of the most beautiful women in the world. Her photograph graced the covers of magazines across the world for half a century, yet in a movie career lasting forty-five years she made only twenty-six feature films, from blink-and-you’ll-miss-them walk-ons in classic films (The Lavender Hill Mob) to enduring masterpieces (My Fair Lady and Breakfast at Tiffany’s) that remain with the viewer long after they’ve left the cinema.

But being a film legend wasn’t enough. For twenty years she dedicated her life to working for UNICEF. The Pocket Essential Audrey Hepburn looks at Audrey’s early life growing up in Holland during the war. Her father was a nazi sympathiser and her mother of Dutch aristocracy and this brought about pressures and experiences that Audrey would carry with her throughout her life. Wartime starvation was responsible for her ‘gamin’ appearance. Her early ambition for a career as a ballet dancer gave her the poise and dignity with which she was eponymous and her forty-year working relationship with the designer Hubert Givenchy created the ‘Hepburn Look’ which Hollywood film stars are still trying to emulate.

As well as an introductory essay, the Pocket Essential Audrey Hepburn has at its core Audrey the film star and each of her films (and the re-makes) is reviewed and analysed, including background information and trivia.