Harlequin Historical April 2015 - Box Set 1 of 2: A Ring from a Marquess\Bound by Duty\Promised by Post\From Wallflower to Countess 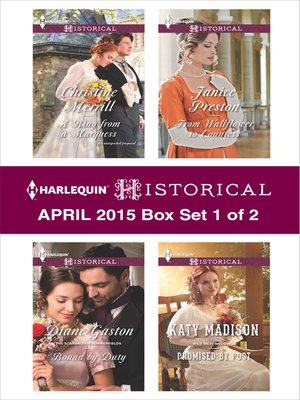 View more libraries...
Harlequin® Historical brings you four new titles about marriage for one great price, available now! Enjoy these timeless love stories that capture the imagination and sizzle with scandal and seduction.
This box set includes a mix of great love stories about marriage:
A RING FROM A MARQUESS by Christine Merrill
The de Bryun Sisters
Stephen Standish, Marquess of Fanworth, sees Margot de Bryun as perfect marriage material—until a stolen family ruby is traced to her jewelry shop. Infuriated, Stephen demands she become his mistress...
(Regency)
BOUND BY DUTY by Diane Gaston
The Scandalous Summerfields
When Tess Summerfield is discovered sheltering in Marc Glenville's arms, only marriage can silence the scandal. Marc's work tears him away, but reunited years later, can they rekindle their flame?
(Regency)
PROMISED BY POST by Katy Madison
Wild West Weddings
When Anna O'Malley becomes a mail-order bride she hopes to find security by marrying a wealthy ranch owner. Instead she finds herself entranced by Daniel Werner—her fiancé's brother!
(Western)
FROM WALLFLOWER TO COUNTESS by Janice Preston
Most girls would dream of marriage to the dashing Earl of Stanton, darling of the ton. For plain Lady Felicity Weston, who is used to being ignored, it's a terrifying prospect!
(Regency)
Look for Box Set 2 of 2 for more timeless stories from Harlequin® Historical!