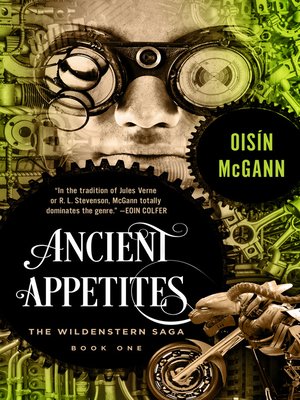 "An exciting new steampunk adventure" featuring living machines, murderous betrayals, and Ireland's most ruthless family (School Library Journal).
The slow collapse of the British Empire in the nineteenth century meant opportunity for anyone with ammunition and wit. Now the Wildensterns are by far the most powerful family—and the most ruthless. Trained from childhood in the arts of assassination and conspiracy and endowed with the supernatural ability to live for more than a century, the clan has grown rich, vicious, and seemingly invincible.

After nearly two years away, eighteen-year-old Nate has returned. But his homecoming is shattered when his eldest brother, Marcus, is mysteriously killed. Following the Rules of Ascension, which allow one male family member to murder another, Nate is being blamed. Nate knows he isn't the murderer, but who is? With the help of his sister-in-law, Daisy, and his cousin Gerald, Nate intends to find out. Their investigation brings them into the underbelly of the Wildenstern empire, where living machines, conspiring relatives, and undercover mercenaries do their dirty work. But when a disaster uncovers the ancient remains of Wildenstern ancestors, the lives of the family members and their struggle for power will take a bizarre and gruesome turn.