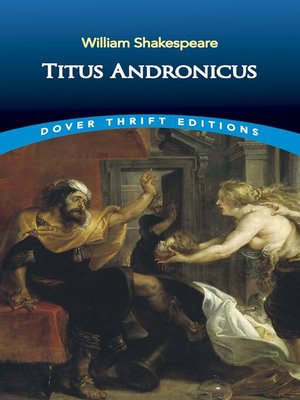 A triumphant general returns to Rome from a war against the Goths and descends into a vicious circle of revenge by refusing to show mercy to his conquered enemy. Blood begets more blood in Titus Andronicus, a fictional drama drawn from a tale by Ovid. Shakespeare styled this early play in the manner of a "revenge tragedy," a genre rooted in classical theater and enormously successful with Elizabethan audiences. Enacting grotesque incidents of rape, murder, and mutilation, this daringly experimental play explores the nature of justice and vengeance.
Critical judgment of the drama ranges from dismissal as a panderer's concession to a bloodthirsty mob to praise as a skillful treatment of theatrical violence that examines suffering through the experience of art. Shakespeare's memorable tragedy questions whether revenge is ever justifiable, and its analysis of moral and political issues ― betrayal, familial loyalties, sexual violence, nationalism, racism―remains ever relevant.

Titus Andronicus
Copy and paste the code into your website.
New here? Learn how to read digital books for free