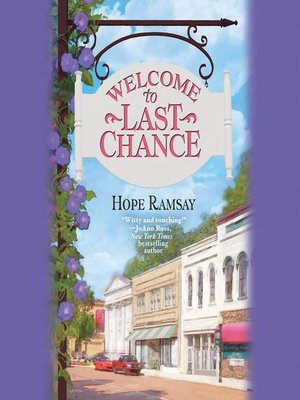 View more libraries...
"The essence of Southern charm!" — Sherryl Woods, New York Times bestselling author
This small town has one beauty shop, one bar, one hardware store... and the one man she's been waiting for all her life.
Last Chance, South Carolina. As soon as Wanda Jane Coblentz sees the name of the town, she can't help but buy a one-way bus ticket-even if it means she's left with just five dollars in her pocket. Jane's hoping to leave her troubles behind and make a fresh start. But when she's drawn to a man playing fiddle in his worn black Stetson at the local watering hole, Jane realizes that falling for yet another bad boy may put an end to her plans to reinvent herself...
Clay Rhodes is ready to settle down. He's intrigued by Jane but it seems like she's just passing through. Then to his surprise, Jane makes herself right at home, and the local matchmakers have him nearly convinced that she's the one for him. Until Jane's dark past follows her to Last Chance, and the woman who's brought a ray of sunshine into his small town may just make a run for it - unless Clay can convince her that she's finally found a home.
Includes the bonus story "A Fairytale Bride"!