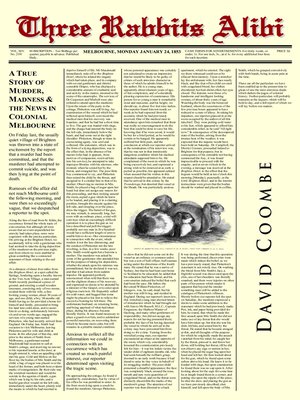 HistoryTrue CrimeNonfiction
A True Story of Murder, Madness & the News in Colonial Melbourne.It's 1850s Australia. A double murder. A locked room. The murderer is dying from a gunshot. But the reporter thinks the scene near impossible. Melbourne Herald reporter Edmund Finn (known to many as Garryowen) described it as "one the most atrocious deeds which darken the pages of colonial history". Yet he also reported that not one man in five hundred could have shot himself with that length of gun. Was all as it seemed? Was the scene's "discovery" staged by Charles Smith to deflect suspicion from himself? Was the suspect the real murderer? And was he sane? This is a journey to Melbourne in 1853. Using historical detective work and tools common to those exploring family history, the author reinvestigates this murder case and those connected with it. He reveals a far more complex story with modern resonance.
HistoryTrue CrimeNonfiction

I enjoy uncovering new stories of ordinary people through their link to extraordinary events. Reading old newspapers, I can get hooked by something odd – something that doesn't seem quite right. From there my research takes unknown paths. But it c...

More about David Coombe
Three Rabbits Alibi
Copy and paste the code into your website.
New here? Learn how to read digital books for free