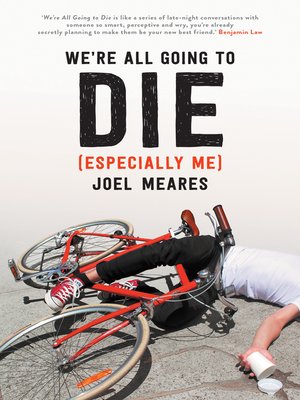 We're All Going to Die (Especially Me)

Biography & AutobiographyLiterary CriticismNonfiction
My late twenties have felt like a series of slow-motion epiphanies, each one sneaking up before slapping me in my newly acquired jowls. Everything I said I'd do 'by the time I'm thirty' as a glassy-eyed graduate is now in the 'by the time I'm forty' box.
Much has been made of delayed adulthood of Gen Y'ers – that they flit from job to job and take their sweet time earning the traditional adult badges: marriage, children, a mortgage. But what makes this generation tick?
In We're All Going to Die (Especially Me), award-winning journalist Joel Meares reflects on the muddle of Gen Y existence with razor-sharp insight and riotous good humour. From 'My hands are pretty, and little' and 'I can't handle my drugs' to 'I am not a New Yorker' and 'I make an excellent bridesmaid', Meares' essays are self-deprecating, confessional and rollicking good fun.
'We're All Going to Die is like a series of late-night conversations with someone so smart, perceptive and wry, you're already secretly planning to make them be your new best friend.' – Benjamin Law
'Joel Meares is going to die at some point. It appears he's not planning to take any secrets with him. Hilarious!' – Annabel Crabb
Joel Meares is the arts editor of The Sydney Morning Herald and former editor of Time Out Sydney. He grew up Catholic near Maroubra Beach but shows little sign of either.
Biography & AutobiographyLiterary CriticismNonfiction

We're All Going to Die (Especially Me)
Copy and paste the code into your website.
New here? Learn how to read digital books for free