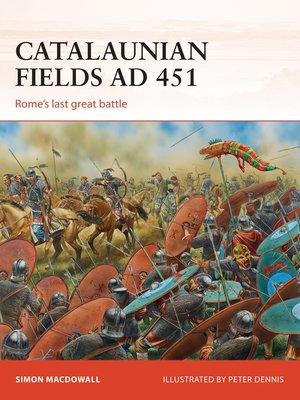 HistoryMilitaryNonfiction
The battle of the Catalaunian Fields saw two massive, powerful empires square up in a conflict that was to shape the course of Eurasian history forever. For despite the Roman victory, the Roman Empire would not survive for more than 15 years following the battle, whilst the Huns, shattered and demoralized, would meet their downfall against a coalition of German tribes soon after. This book, using revealing bird's-eye-views of the plains of Champagne and detailed illustrations of the opposing warriors in the midst of desperate combat, describes the fighting at the Catalaunian Fields and reveals the broader campaign of Hunnic incursion that led up to it. Drawing on the latest research, Simon MacDowall reveals the shocking intensity and appalling casualties of the battle, whilst assessing the wider significance and consequences of the campaign.
HistoryMilitaryNonfiction

Peter Dennis was inspired by contemporary magazines such as Look and Learn, leading him to study Illustration at Liverpool Art College. Peter has since contributed to hundreds of books, predominantly on historical subjects, including many Osprey t...

More about Simon MacDowall
Catalaunian Fields AD 451
Copy and paste the code into your website.
New here? Learn how to read digital books for free