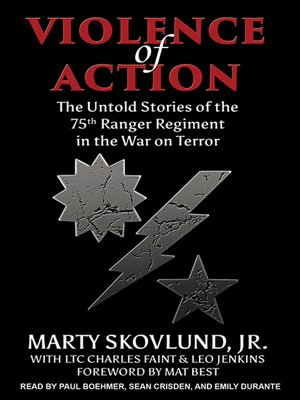 HistoryMilitaryNonfiction
Violence of Action is much more than the true, first-person accounts of the 75th Ranger Regiment in the Global War on Terror. Between these pages are the heartfelt, first-hand accounts from, and about, the men who lived, fought, and died for their country, their Regiment, and each other. Objective Rhino, Haditha Dam, recovering Jessica Lynch, the hunt for Zarqawi, the recovery of Extortion 17 and everything in between . . . These stories have been told many times in barracks rooms, bar tables, and backyard barbecues but they have never before been shared with the general public. It is time for those stories to be heard. So much more than just stories from a specific unit; this book reveals the sights, smells, and emotions of everything that happens in war-good or bad. It will be seen as the quintessential, ageless work on the human condition in combat.
HistoryMilitaryNonfiction

Leo Jenkins is the author of Lest We Forget, On Assimilation, and First Train Out of Denver. He is a former Ranger medic, life connoisseur, writer of words, traveler of nations, and drinker of beers.

Sean Crisden is a multitalented actor and an AudioFile Earphones Award-winning narrator who has recorded audiobooks in almost every genre, from science fiction to romance. He has also voiced characters in numerous video games and appeared in many ...

Marty Skovlund, Jr., enlisted in the U.S. Army immediately after high school. He served in a variety of roles in the 1st Battalion, 75th Ranger Regiment, and deployed to both Iraq and Afghanistan on multiple occasions. In 2012, he founded Blacksid...

Violence of Action
Copy and paste the code into your website.
New here? Learn how to read digital books for free