Song from the Forest

ebook ∣ My Life among the Pygmies 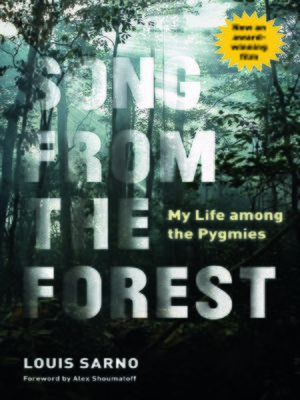 View more libraries...
As a young man, American Louis Sarno heard a song on the radio that gripped his imagination. With some funding from musician Brian Eno, he followed the mysterious sounds all the way to the Central African rain forest and found their source with the Bayaka Pygmies, a tribe of hunters and gatherers. Nothing could have prepared him for life among the Pygmies, a people legendary for their short stature and musical wealth. Sarno never left.
Considered outwardly lazy by some, scrounging, and near alcoholic, the Pygmies Sarno met had seemingly lost all desire to hunt or make music. Only after he had lived with them for some time (on a diet of tadpoles) was he allowed to join them in the rain forest where they still in relative harmony with nature. There Sarno experienced the extraordinary beauty and spiritual sophistication of their culture and the supreme importance of music as the principal means by which they communicate with the rain forest and its magical spirits.
Over the decades Sarno has recorded more than 1,000 hours of unique Bayaka music. He is a fully accepted member of the Bayaka society and married a Bayaka woman. Permanently changed by his experience and captivated by a Bayaka culture, In Song from the ForestSarno has chronicled his attempt to protect the fragile existence of the Pygmies in an increasingly destructive world.
Once, when his son, Samedi, became seriously ill and Sarno feared for his life, he held his son in his arms through a frightful night and made him a promise: “If you get through this, one day I'll show you the world I come from." Now the time has come to fulfill his promise.
In a new major documentary film, Sarno tells the story of the Bayaka as he travels with Samedi from the African rain forest to another jungle, one of concrete, glass, and asphalt: New York City. Together, they meet Louis' family and old friends, including his closest friend from college, Jim Jarmusch. Carried by the contrasts between rainforest and urban America, and a fascinating soundtrack, Louis' and Samedi's stories are interwoven to form a touching portrait of an extraordinary man and his son. Song from the Forest is a modern epic film set between rainforest and skyscrapers.