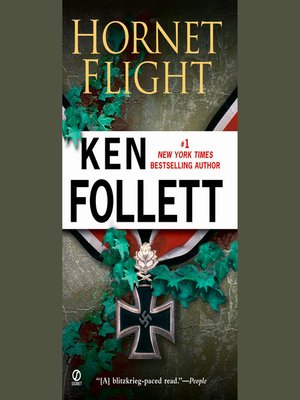 FictionLiteratureThrillerHistorical Fiction
Ken Follett follows his bestsellers Jackdaws and Code to Zero with an extraordinary novel of early days of World War II.
It is June 1941 and the war is not going well for England. Across the North Sea, 18-year-old Harald Olufsen takes a shortcut on the German-occupied Danish island of Sande and discovers an astonishing sight that will change the momentum of the war. He must get word to England—except that he has no way to get there. He has only an old derelict Hornet Moth biplane rusting away in a ruined church: a plane so decrepit that it is unlikely ever to get off the ground . . . even if Harald knew how to fly it.
FictionLiteratureThrillerHistorical Fiction

Ken Follett is one of the world's most successful authors. More than 160 million copies of the 30 books he has written have been sold in over 80 countries and in 33 languages. Born on June 5, 1949, in Cardiff, Wales, the son of a tax inspector, Ke...

More about Ken Follett
Hornet Flight
Copy and paste the code into your website.
New here? Learn how to read digital books for free