A Rule Against Murder / The Brutal Telling / Bury Your Dead 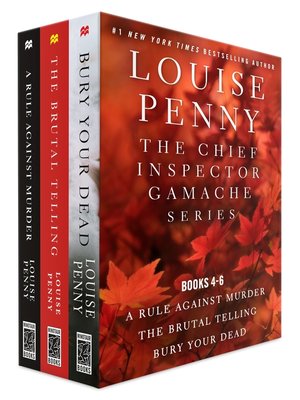 A Rule Against Murder

Chief Inspector Gamache and his wife are celebrating their anniversary at the luxurious, isolated Manoir Bellechasse. But when a dead body turns up in the midst of a family reunion, Gamache learns that the lodge is a place where visitors come to escape their past, until that past catches up with them.

A stranger is found murdered in Olivier's Bistro in Three Pines, and Chief Inspector Gamache is dismayed to find Olivier's story full of holes. Gamache follows a trail of clues into the woods and across the continent before returning to Three Pines to confront the truth and the final, brutal telling.

It's Winter Carnival in Quebec City, when Chief Inspector Gamache is called to investigate a dead body at the Literary and Historical Society. Meanwhile, Gamache is receiving disquieting letters from Three Pines, and as past and present collide, he must relive a terrible event from his own past before he can begin to bury his dead.