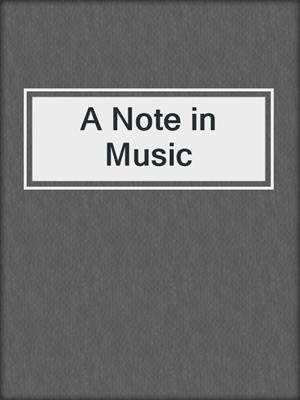 A Note in Music

A seductive new stranger becomes the symbol of everything two married women secretly long for in this richly imagined novel by one of the most distinguished writers of the twentieth century
Thirty-four-year-old Grace Fairfax lives a dull, conventional existence with her dull, conventional husband, Tom, in a dreary manufacturing town in the North of England. A year ago, when a fortune-teller told her that her life lacked will and purpose, she wasn't surprised. Every day the same predictable routine—it's a wonder she doesn't go mad.

Then Hugh Miller and his sister, Clare, descend on the town. Clare is young and beautiful. Hugh seems to possess everything lacking in Grace's life: passion, vitality, and most important, the freedom to do as he pleases. Grace's best friend, Norah MacKay, isn't immune to the handsome stranger's charms, either. Married to Gerald, a curmudgeonly university professor, the mother of two has her own fantasies of desire and liberation. But Hugh isn't the man Grace and Norah imagine him to be.

In this story of two strangers who cast an otherworldly enchantment on an entire town and its inhabitants, A Note in Music presents an intensely moving portrait of marriage—its disappointments, joys, jealousies, fears, and loneliness, and the truths that remain unspoken.

More about Rosamond Lehmann
A Note in Music
Copy and paste the code into your website.
New here? Learn how to read digital books for free