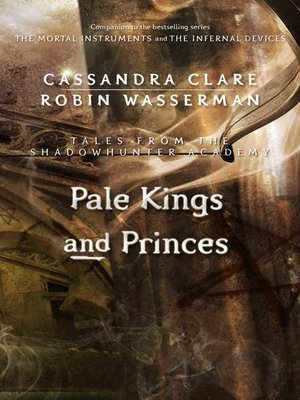 View more libraries...
As a former vampire, Simon gets along with Downworlders. The Clave does not. One of ten adventures in Tales from the Shadowhunter Academy.
As a former vampire, Simon’s always been sympathetic to Downworlders. But after a training exercise goes wrong, he gets a glimpse into the Shadowhunters’ prejudice as he learns about the origin of Helen and Mark Blackthorn, principle characters in The Dark Artifices.

This standalone e-only short story follows the adventures of Simon Lewis, star of the #1 New York Times bestselling series, The Mortal Instruments, as he trains to become a Shadowhunter. Tales from the Shadowhunter Academy features characters from Cassandra Clare’s Mortal Instruments, Infernal Devices, and the upcoming Dark Artifices and Last Hours series. Pale Kings and Princes is written by Cassandra Clare and Robin Wasserman.

Read more of Cassandra Clare’s Shadowhunter Chronicles in The Infernal Devices, The Mortal Instruments, and The Bane Chronicles.