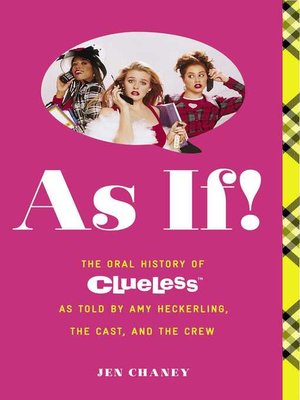 Chaney explores the influence of Jane Austen's Emma as the unlikely framework for Heckerling's script, the rigorous casting process (including the future stars who didn't make the cut), the functional yet fashion-forward wardrobe, the unique slang that drew from the past and coined new phrases for the future, the sun-drenched soundtrack that set the tone, and—above all—the massive amount of work, creativity, and craft that went into making Clueless look so effortlessly bright and glossy.

As If! illuminates why plaid skirts and knee socks will never go out of style, and why Clueless remains one of the most beloved comedies of all time.
Biography & AutobiographyPerforming ArtsNonfiction

Jen Chaney has been a journalist for twenty years and has spent much of that time writing about movies, television, and popular culture. She currently writes reviews, feature stories, essays, and TV analyses for numerous publications, including Ne...

More about Jen Chaney
As If!
Copy and paste the code into your website.
New here? Learn how to read digital books for free