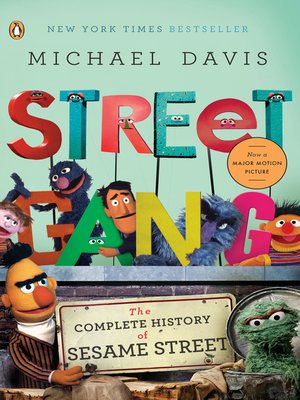 View more libraries...
The New York Times bestselling account of the story behind one of the most influential, durable, and beloved shows in the history of television: Sesame Street, moving to HBO this fall
"Davis tracks down every Sesame anecdote and every Sesame personality in his book . . . Finally, we get to touch Big Bird's feathers." —The New York Times Book Review
Sesame Street is the longest-running-and arguably most beloved- children's television program ever created. Today, it reaches some six million preschoolers weekly in the United States and countless others in 140 countries around the world.
Street Gang is the compelling, comical, and inspiring story of a media masterpiece and pop-culture landmark. Television reporter and columnist Michael Davis-with the complete participation of Joan Ganz Cooney, one of the show's founders-unveils the idealistic personalities, decades of social and cultural change, stories of compassion and personal sacrifice, and miraculous efforts of writers, producers, directors, and puppeteers that together transformed an empty soundstage into the most recognizable block of real estate in television history.
From the Trade Paperback edition.