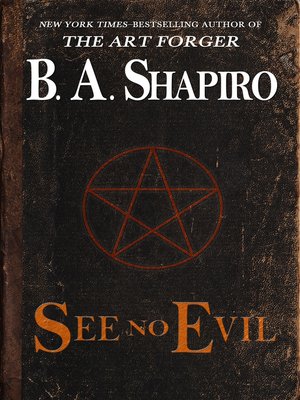 View more libraries...
A New England academic uncovers a dangerous world of witches in this "engrossing" thriller from the New York Times–bestselling author of The Art Forger (Mystery News).
See No Evil is a supernatural thriller about witchcraft, reincarnation, and murder in Cambridge, Massachusetts. The story opens as Lauren Freeman touches the worn leather binding of The Chronicle of the Coven. She sees a flash of knives and hears a strange chorus of voices in her head.
Lauren is undeterred. A newly divorced single mother, she is a graduate student in history writing a book about American witch trials with her professor Jackie Pappas. Lauren needs the money the book will bring. Its focus is a mysterious event that took place in 1692 when seven convicted "witches" vanished from their prison cells on the eve of their executions and were never seen again.
Lauren and Jackie's research begins to uncover bizarre reports. Then, suddenly, Jackie is dead, and Lauren is left to write their book alone. Lauren knows that Jackie was murdered and that if she is not careful, she will be next.
Lauren's battle to avenge Jackie's death and save her own life takes her from Wiccan festivals to ancient cemeteries to the bowels of dark libraries. After her son's kidnapping, multiple murder attempts, and a chase through labyrinthine subway tunnels, Lauren finally confronts the perpetrator of these horrific events and acknowledges that, even in the everyday, things are often not as they seem.