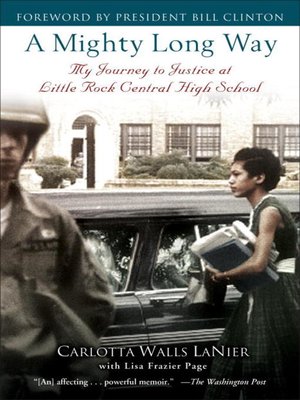 View more libraries...
“A searing and emotionally gripping account of a young black girl growing up to become a strong black woman during the most difficult time of racial segregation.”—Professor Charles Ogletree, Harvard Law School

When fourteen-year-old Carlotta Walls walked up the stairs of Little Rock Central High School on September 25, 1957, she and eight other black students only wanted to make it to class. But the journey of the “Little Rock Nine,” as they came to be known, would lead the nation on an even longer and much more turbulent path, one that would challenge prevailing attitudes, break down barriers, and forever change the landscape of America.

For Carlotta and the eight other children, simply getting through the door of this admired academic institution involved angry mobs, racist elected officials, and intervention by President Dwight D. Eisenhower, who was forced to send in the 101st Airborne to escort the Nine into the building. But entry was simply the first of many trials. Breaking her silence at last and sharing her story for the first time, Carlotta Walls has written an engrossing memoir that is a testament not only to the power of a single person to make a difference but also to the sacrifices made by families and communities that found themselves a part of history.