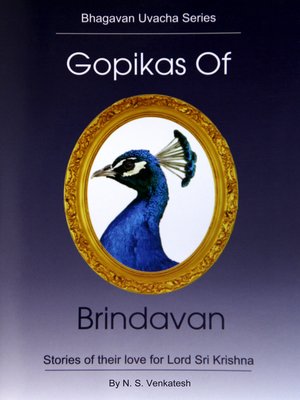 Religion & SpiritualityNonfiction
The Bhagawan Uvacha series brings to devotees the world over, a compilation of Bhagawan Sri Sathya Sai Baba's teachings in the form of quotations, skilfully compiled and woven together by Shri. N. S. Venkatesh, the compiler.In this book in the series, Gopikas Of Brindavan, Shri. Venkatesh says, "The simple folk of Brindavan were an illiterate lot. They were ignorant to the ways of the world. They went about their daily duties like you and me, living lives of relative obscurity. But, their love for God earned them the coveted privilege of being 'His own' during His advent as Sri Krishna. This book is about the women, who left their impressions on the sands of time, but more importantly, in the heart of God. It is the one-pointed devotion, which has been the praise of men, seekers, and poets alike. It is also their constant communion with the Lord. It is about the love, a love that is acknowledged till date by our beloved Bhagawan. Listen to Him as He speaks of His precious gopikas of Brindavan."
Religion & SpiritualityNonfiction

The compiler of the Bhagawan Uvacha series, Volume 1, 2, and 3, comprising 21 books in total.

More about N. S. Venkatesh
Gopikas of Brindavan
Copy and paste the code into your website.
New here? Learn how to read digital books for free