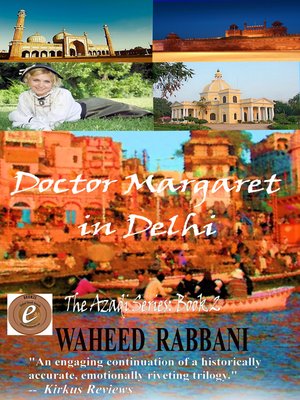 *** This novel won the Bronze Award in the 2018 Global eBooks Awards Competition.

Doctor Margaret in Delhi is Book 2 of The Azadi Series and a sequel to, Book 1: Doctor Margaret's Sea Chest. This historical fiction novel continues with Margaret's journey from the time she and her Canadian husband participated in the 1854 Crimean War.

Doctor Margaret travels alone to India to be with her parents at the American Presbyterian Mission at Futtehgurh, and then on to her posting at a hospital in Delhi. There she has to not only overcome work pressures, but also deal with her intimidators and intrigues of the Mughals, at the Delhi Red Fort.

Margaret's tormentor since her childhood, Captain Albert, also joins a British regiment bound for service in India. The Russian, Captain Count Nicholai, whom Margaret had met in Crimea, also arrives in India under the guise of a French physician.

The events leading up to the Indian Mutiny/Rebellion that breaks out in 1857 profoundly affect not only Margaret's life, but also of those who love her and others' who wish her harm.

Also, mixed-up in the bedlam is one of the King Shah Zafar's Red Fort Guards sepoys, Sharif Khan Bhadur, the grandfather of Doctor Wallidad, an American doctor.

The Azadi Series covers the exciting events and turmoil that enflamed India from 1857 to 1947, and led to her independence. Those incidences engulf the characters of this story at that time, and then later their descendant's lives, again in the 1960s.