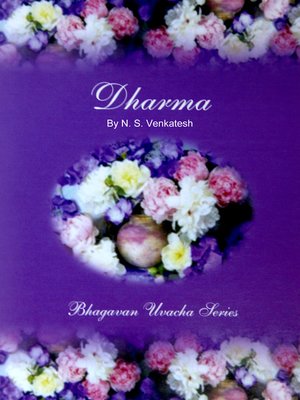 PhilosophyReligion & SpiritualityNonfiction
Dharma is generally used in two contexts. One, as duty and the second, as righteousness. Every individual dons a number of roles during his Earthly sojourn. He plays the part of a son, a father, a friend, a disciple, a husband, a professional, a seeker. Each of these roles dictates a certain code of conduct, do's and don'ts that govern his decisions at various points. One's dharma serves as guiding star during moments of internal conflict. It serves as a benchmark to action. Understanding the nature of dharma is imperative to holistic decision-making in a world that offers a million options. "Dharmo Rakshati Rakshitaha," it is said. Dharma protects its protector. Listen to Bhagawan as He speaks of the nature of Dharma and its role in one's life.
PhilosophyReligion & SpiritualityNonfiction

The compiler of the Bhagawan Uvacha series, Volume 1, 2, and 3, comprising 21 books in total.

More about N. S. Venkatesh
Dharma
Copy and paste the code into your website.
New here? Learn how to read digital books for free