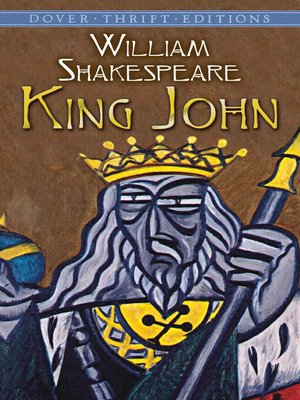 Amid a backdrop of war, conspiracy, and murder, this historical play depicts the troubled reign of King John, who ruled England from 1199 to 1216. Shakespeare's most enigmatic king struggles with the shifting loyalties of his nobles as well as threats from his covetous heirs and the burdens of his own conscience. The play, which abounds in battles and betrayals, explores issues of politics, inheritance, and legitimacy.

John's problems are threefold: he has usurped the throne from the rightful heir, his nephew Arthur; his relationship with the Vatican is troubled; and he is highly unpopular with his own subjects. Shakespeare's portrayal of the despised monarch finds a more heroic figure in Sir Richard Plantagenet, an illegitimate son of Richard I. The Bastard, as John's loyal nephew is known, forms the moral center of the play as well as a source of irreverent humor and honesty. A cynical play about power struggles, King John offers a remarkably contemporary mix of history and ironic commentary, balanced in equal measures by elements of tragedy and satire.

King John
Copy and paste the code into your website.
New here? Learn how to read digital books for free