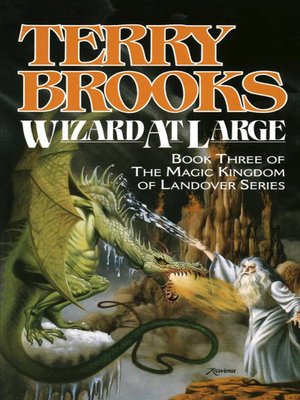 It all began when the half-able wizard Questor Thews announced that finally he could restore the Court Scribe Abernathy to human form. It was his spell that had turned Abernathy into a Wheaten Terrier—though with hands and able to talk.
All went well—until the wizard breathed the magic dust of his spell and suddenly sneezed. Then, where Abernathy had stood, there was only a bottle containing a particularly evil imp. It had been in the collection of Michael Ard Rhi, former King of Landover, now exiled to Earth. Abernathy must now be a part of that collection!
High Lord Ben Holiday set forth for Earth, taking his green but beautiful love, Willow, with him. Unfortunately, they were long in returning. And without the soil in which to root as a tree at times, Willow could not long survive.
That left it up to Questor Thews to save them. Grimly he set out to seek help, knowing himself to be incompetent. And to make things worse, the imp had escaped and sought the help of the evil witch Nightshade, now back from exile in Faerie.
Questor's only idea seemed impossible, but . . .
FantasyFictionThrillerHumor (Fiction)

More about Terry Brooks
Wizard at Large
Copy and paste the code into your website.
New here? Learn how to read digital books for free