Every Citizen a Soldier

By William A. Taylor 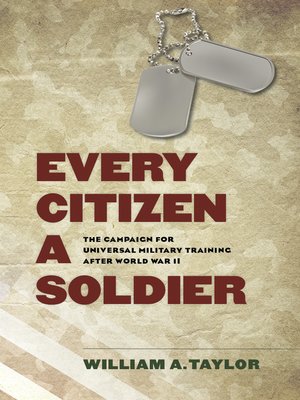 Beginning in 1943, US Army leaders such as John M. Palmer, Walter L. Weible, George C. Marshall, and John J. McCloy mounted a sustained and vigorous campaign to establish a system of universal military training (UMT) in America. Fearful of repeating the rapid demobilization and severe budget cuts that had accompanied peace following World War I, these leaders saw UMT as the basis for their postwar plans. As a result, they promoted UMT extensively and aggressively.
In Every Citizen a Soldier: The Campaign for Universal Military Training after World War II, William A. Taylor illustrates how army leaders failed to adapt their strategy to the political realities of the day and underscores the delicate balance in American democracy between civilian and military control of strategy. This story is vital because of the ultimate outcome of the failure of the UMT initiative: the birth of the Cold War draft.