I Saw a Strange Land 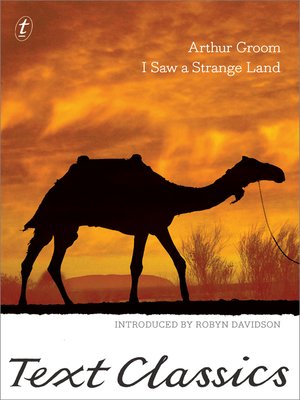 While living in Central Australia Arthur Groom fell under the spell of our harsh and fascinating country, captivated by its limitless distances and unbelievable colour. Hermannsburg, the home of artist Albert Namatjira and of other well-known painters, became Groom's headquarters, and from there he made numerous expeditions into wilder and more inaccessible regions.

Travelling on foot with an Indigenous guide and a team of camels, Groom explored the Macdonnell and Krichauff ranges, the desert country past the salty Lake Amadeus, Uluru and the Olgas. Based on the notes and photographs he took as he travelled, I Saw a Strange Land is Groom's wonderful record of his extensive journey through the heart of our continent - our 'strange land.'

Arthur Groom (1904-1953) was the son of Arthur Champion Groom, member for Flinders in Australia's first Federal Parliament. Groom grew up on a cattle station in Rosabelle Downs, Queensland and later worked as a jackaroo and a journalist. Groom was passionate about the promotion of national parks and environmental protection and he went on to become the first honorary secretary of the National Parks Association of Queensland in 1930. He founded Binna Burra Lodge on the edge of Lamington Nation Park in Southeast Queensland in 1933 with Romeo Lahey. He is the author of four books including One Mountain After Another (1949) and I Saw A Strange Land (1953).