The SS on Trial 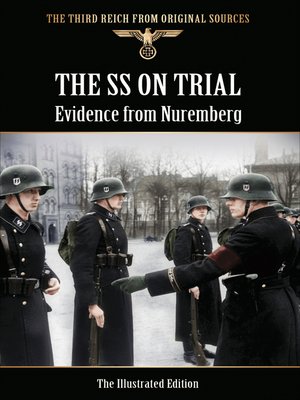 After the defeat of Nazi Germany, the Nuremberg Trials were conducted by the four victorious Allied forces of Great Britain, the United States, France, and the Soviet Union. They were held in the Palace of Justice, Nuremberg, Germany, from November 1945 to October 1946. Famous for prosecuting the major German war criminals, they also tried the various groups and organizations that were at the heart of Nazi Germany.

Part of the illustrated series The Third Reich from Original Sources, The SS on Trial presents the complete testimony from the hearings, including the original indictment, the criminal case put forward for the SS, the closing speeches by the prosecution and defense, and the final judgment. Former SS members often wondered why they were charged as war criminals when they merely performed their "normal" duty. The Military Tribunal at Nuremberg attempted to answer that question.

The witnesses called include Friedrich Karl von Eberstein, an early member of the Nazi Party, the SA, and the SS; Paul Hausser, one of the most eminent leaders of the Waffen-SS who vehemently defended their military role in the war; Georg Konrad Morgen, a former SS judge; and Wolfram Sievers, the Reich manager of the Ahnenerbe.

Featuring forty photographs and charts, this indispensable volume explores how the actions of Nazi soldiers challenged humanity's notions of criminality and global justice.