ebook ∣ A Celebration of the Voting Rights Act of 1965 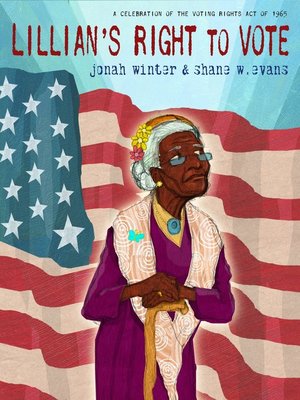 View more libraries...
An elderly African American woman, en route to vote, remembers her family’s tumultuous voting history in this picture book publishing in time for the fiftieth anniversary of the Voting Rights Act of 1965.

As Lillian, a one-hundred-year-old African American woman, makes a “long haul up a steep hill” to her polling place, she sees more than trees and sky—she sees her family’s history. She sees the passage of the Fifteenth Amendment and her great-grandfather voting for the first time. She sees her parents trying to register to vote. And she sees herself marching in a protest from Selma to Montgomery. Veteran bestselling picture-book author Jonah Winter and Coretta Scott King Illustrator Award winner Shane W. Evans vividly recall America’s battle for civil rights in this lyrical, poignant account of one woman’s fierce determination to make it up the hill and make her voice heard.
"Moving.... Stirs up a potent mixture of grief, anger, and pride at the history of black people’s fight for access to the ballot box." —The New York Times
"A much-needed picture book that will enlighten a new generation about battles won and a timely call to uphold these victories in the present." —Kirkus Reviews, Starred
"A valuable introduction to and overview of the civil rights movement." —Publishers Weekly, Starred
"An important book that will give you goose bumps." —Booklist, Starred