If the Viscount Falls 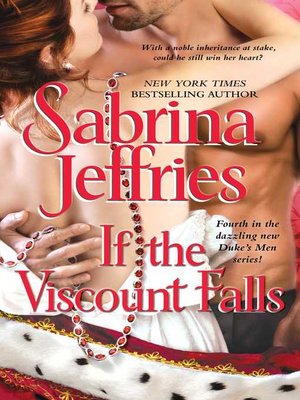 View more libraries...
From New York Times bestselling author Sabrina Jeffries, the deliciously sexy fourth book in the Duke's Men Regency romance series—the first of which was called "a totally engaging, adventurous love story" (RT Book Reviews, Top Pick).
The heir presumptive to the Viscount Rathmoor, Dominick Manton once had his heart's desire within reach—a bright future as a barrister and engagement to Jane Vernon, a wealthy baron's daughter. Then a shattering betrayal by his vindictive brother George snatched away Dom's inheritance and his hopes of offering Jane a secure future. Brokenhearted, and attempting to end their engagement without destroying Jane's reputation, Dom staged a betrayal of his own to convince her that he's not the husband-to-be that she thought.

Now George is gone and the viscountcy restored to Dom, since his brother's widow, Nancy—Jane's cousin and closest confidant—never bore an heir. But when Nancy goes missing, a panicked Jane calls on her former fiancé to track down her cousin. Dom knows the mistakes of the past may be unforgiveable—but now, entangled together in mystery and danger, will they rekindle a passionate longing that was never lost to begin with?