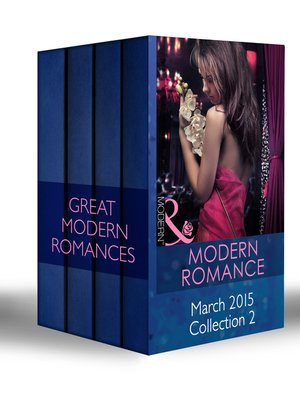 FictionRomanceShort Stories
*Modern Romance March 2015 Bundle B – Four glamorous, international romances THE REAL ROMERO by Cathy Williams Milly Mayfield is livid when she discovers that Lucas Romero, the "ski instructor" she gave herself to in a sumptuous French ski chalet is actually a billionaire! But when Lucas needs her help in a family emergency, Milly suddenly finds herself whisked away to Spain...and engaged! HIS DEFIANT DESERT QUEEN by Jane Porter When Sheikh Mikael catches notorious model Jemma Copeland flaunting Saidia's laws—and her body—in his desert, he knows one thing: revenge against his family's destruction is within his reach! To achieve it he makes Jemma an offer: imprisonment or marriage. PRINCE NADIR'S SECRET HEIR by Michelle Conder Prince Nadir's brief liaison with virginal Moulin Rouge dancer Imogen Reid was over almost before it began. And Imogen fled...carrying something very precious to Nadir. Now he's found her again –and he wants to finish what they started in Paris! THE TYCOON'S STOWAWAY by Stefanie London Luxury yacht tycoon Brodie Mitchell and dancer Chantal Turner haven't seen each other since one fateful night eight years ago. On Brodie's yacht, exploring their electric chemistry opens Brodie's eyes to what he really wants – what he's always wanted: Chantal. Look for more wonderful novels from Mills & Boon Modern every month!
FictionRomanceShort Stories

From as far back as she can remember Michelle Conder dreamed of being a writer. She penned the first chapter of a romance novel just out of high school, but it took much study, many (varied) jobs, one ultra-understanding husband and three gorgeous...

Jane Porter loves central California's golden foothills and miles of farmland, rich with the sweet and heady fragrance of orange blossoms. Her parents fed her imagination by taking Jane to Europe for a year where she became passionate about Italy ...

Stefanie London is a USA Today Bestselling author of contemporary romance. Her books have been called "genuinely entertaining and memorable" by Booklist, and her writing praised as "elegant, descriptive and delectable" by RT Magazine. Originally f...

Modern Romance March 2015 Collection 2
Copy and paste the code into your website.
New here? Learn how to read digital books for free