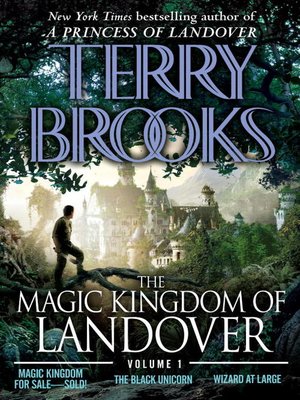 The Magic Kingdom of Landover, Volume 1

FantasyFictionThrillerHumor (Fiction)
Capture the fantasy, thrills, and far-flung adventure of the first three novels in Terry Brooks's enchanting Magic Kingdom of Landover series—now for the first time in one gripping volume.
Chicago lawyer Ben Holiday can't fathom what lies ahead when he purchases Landover—a magical kingdom of chivalry and sorcery—from Meeks, the mysterious seller who placed the ad. Weary and jaded, Ben clings to the ad's promise: "Escape into your dreams." But Landover is not the enchanted idyll he expected.
The kingdom is in ruin. The barons refuse to recognize Ben as King, a dragon is decimating the countryside, and a demon lord has challenged any prospective ruler to a fatal duel. To make matters worse, the Paladin, renowned champion of the Kings of Landover, seems to be merely a legend.
Ben's only allies are a bumbling court magician, a talking dog turned court scribe, and the beautiful Willow, who is part girl, part tree. With his friends in tow, Ben sets out to claim the throne. But when Meeks decides he wants Landover back, Ben will face supernatural foes of every stripe to prove himself worthy of the kingship. The question is: Can he survive?
FantasyFictionThrillerHumor (Fiction)

More about Terry Brooks
The Magic Kingdom of Landover, Volume 1
Copy and paste the code into your website.
New here? Learn how to read digital books for free