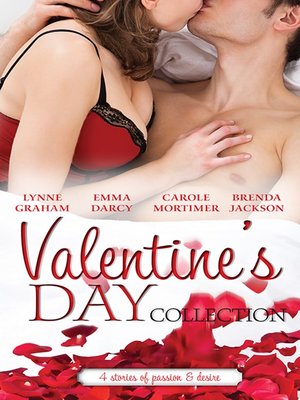 When Poppy sent the tall, dark and handsome Santino Aragone a Valentine's card to cheer him up, Santino responded by making love to her. Suddenly, Poppy was expecting her boss's baby, and he was determined to put a ring on her finger...

St Valentine's Day is a special day for lovers all over the world, especially for Caitlin Ross. This year she is sure that David Hartley will admit he loves her. But Caitlin has forgotten that Valentine's Day casts its own special magic and the surprise she receives and the shock that is in store for David will make this a February the fourteenth they will never, ever forget!

The One And Only - Carole Mortimer

Valentine's night spent in the arms of Marcus Ballantyne! It happened to Joy — but not without the actor thinking that she was a married woman with a string of lovers! In reality, Joy was a provincial librarian who hadn't had a date since her boyfriend jilted her — how did she land herself in this mess..and who will she convince Marcus that he was the only man she'd ever love?

From when she met Tag Elliott, Renee Williams thought of nothing but how his lips would feel on hers. But as a member of Manhattan's wealthiest family, Caucasian Tag was way out of the black social worker's league. Renee had agreed to one night to live their fantasies, but in the light of day Tag decided once was not enough....