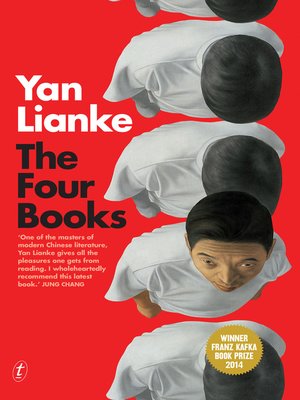 Yan Lianke's most powerful novel yet. Reminiscent of A Day in the Life of Ivan Denisovich and Darkness at Noon, Yan's mythical tale portrays the grotesque persecution during the Great Leap Forward.

In the ninety-ninth district of a labour camp, the Author, Musician, Scholar, Theologian and Technician undergo re-education, to restore their revolutionary zeal. In charge of this process is the Child, who delights in enforcing draconian rules.

The Four Books tells the story of one of China's most controversial periods. It also reveals the power of camaraderie, love and faith against oppression in the darkest possible times.

Yan Lianke was born in 1958 in Henan Province, China. Text has published his novels Serve the People!, Lenin’s Kisses and Dream of Ding Village, which was shortlisted for the Man Asian Literary Prize. Yan Lianke won the Hua Zhong World Chinese Literature Prize in 2013. He has also won two of China's most prestigious literary awards: the Lu Xan Prize and the Lao She Award. In 2014, he won the Franz Kafka Prize. He lives in Bejing.

'Author Yan's deft satire, comic touches and his endless compassion bring smiles and tears through a journey that swings effortlessly back and forward between the absurd, the real and moments of magic. It is an epic tale of how grand, event if well-meant, plans can be tarnished by greed and unhappiness. It cautions against being consumed by power. Here is a splendid storyteller in the tradition of Jonathan Swift. Yan's writing is masterful, his imagination and his satire soars above the common.' Courier Mail

'Yan's postmodern cartoon of the Communist dream caving to run-amok capitalism is fiendishly clever, in parodying the conventions of fables and historical scholarship. The ghost of another famous dead Russian, Nikolai Gogol, hovers over the proceedings in spirit, if not in economy of means.' New York Times

'Yan at the peak of his absurdist powers. He writes in the spirit of the dissident writer Vladimir Voinovich, who observed that “reality and satire are the same".' New Yorker