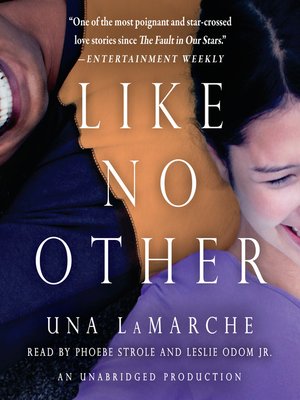 RomanceYoung Adult Fiction
Fitting seamlessly alongside current bestsellers like Rainbow Rowell's Eleanor & Park, and John Green's Paper Towns, LIKE NO OTHER provides a thoroughly modern take on romance that will inspire laughter, tears, and the belief that love can happen when you least expect it.
"Electrifying...surprisingly seductive. LaMarche expertly conjures up what high-stakes infatuation feels like." —The New York Times Book Review

"[A] refreshing tale of forbidden love."—People Magazine
"One of the most poignant and star-crossed love stories since The Fault in Our Stars." —Entertainment Weekly
Fate brought them together. Will life tear them apart? Devorah is a consummate good girl who has never challenged the ways of her strict Hasidic upbringing. Jaxon is a fun-loving, book-smart nerd who has never been comfortable around girls (unless you count his four younger sisters). They've spent their entire lives in Brooklyn, on opposite sides of the same street. Their paths never crossed...until one day, they did.
When a hurricane strikes the Northeast, the pair becomes stranded in an elevator together, where fate leaves them no choice but to make an otherwise risky connection. Though their relationship is strictly forbidden, Devorah and Jaxon arrange secret meetings and risk everything to be together. But how far can they go? Just how much are they willing to give up?
From the Trade Paperback edition.
RomanceYoung Adult Fiction

Una LaMarche is a writer and journalist whose work appears regularly in the New York Observer and on the Huffington Post. She is the author of Five Summers, a young adult novel, and Unabrow, a collection of humorous essays based on some of her mor...

More about Una LaMarche
Like No Other
Copy and paste the code into your website.
New here? Learn how to read digital books for free