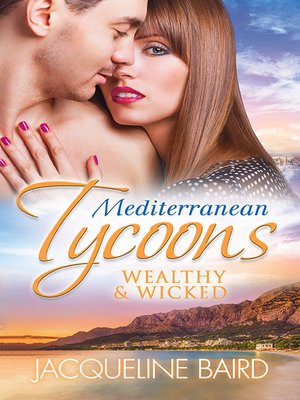 Naïve Phoebe Brown fell for Mediterranean magnate Jed Sabbides after he wined, dined and bedded her with a fervour that made her feel cherished. But when Phoebe happily announced she was pregnant, Jed was appalled. Sadly, Phoebe lost the man she loved...and her baby. So it is with disbelief that, years later, Jed discovers Phoebe has a little boy...who looks just like him!

When millionaire Theodore Kadros first sets his sights on beautiful Willow Blain there can only ever be one outcome: a night of incredible desire. But the next day Willow is gone...Their brief passion results in a legacy that Willow is eager to conceal. When the Greek tycoon discovers the shocking truth, he is enraged. Theo demands they marry so he can have what he feels is rightfully his—Willow as his wife...and at his mercy!

Bought by the Greek Tycoon

Greek multimillionaire Luke Devetzi will do anything to get Jemma Barnes back in his bed for a night of blazing passion. So when Luke
discovers that Jemma's father is in financial trouble and in need of a loan, he is willing to pay it...but only if Jemma agrees to become his convenient wife!

Mediterranean Tycoons
Copy and paste the code into your website.
New here? Learn how to read digital books for free