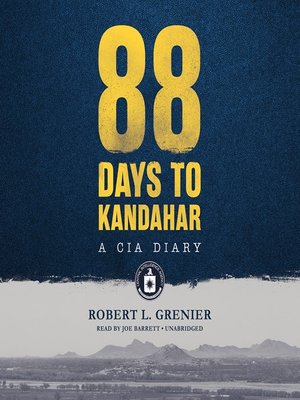 The "first" Afghan War, the CIA's war in response to 9/11,was approved by President Bush and directed by the author, Robert Grenier, theCIA station chief in Islamabad. Forging separate alliances with warlords,Taliban dissidents, and Pakistani intelligence, Grenier defeated the Talibanand put Hamid Karzai in power in eighty-eight days. Later, as head of CIAcounterterrorism, he watches as bureaucratic dysfunction in the CIA, Pentagon,and the White House lead to failure in Iraq and Afghanistan.

In his gripping narrative we meet General Tommy Franks, whobridles at CIA control of "his" war; General "Jafar Amin," a gruff Pakistaniintelligence officer who saves Grenier from committing career suicide; MaleehaLodhi, Pakistan's brilliant ambassador to the US, who tries to warn hergovernment of the al-Qaeda threat; "Mark," the CIA operator who guides GulAgha Shirzai to bloody victory over the Taliban; General Kayani, a cautious manwho will become the most powerful man in Pakistan, struggling with Grenier'sdemands while trying to protect his country; and Hamid Karzai, the puzzlinganti-Taliban insurgent, a man of courage, petulance, and vacillating moods.

Grenier's enemies out in front prove only slightly morelethal than the ones behind his own lines. This first war is won despiteWashington bureaucrats who divert resources, deny military support, and try toundermine the only Afghan allies capable of winning.

Later, as Grenier directed the CIA's role in the Iraq War,he watched the initial victory squandered. His last command was of CIA'sCounterterrorism Center, as Bush-era terrorism policies were beingrepudiated, as the Taliban reemerged in Afghanistan, and as Pakistan descendedinto fratricidal violence.

Robert L. Grenier had a much-decorated twenty-seven-year career in the CIA's National Clandestine Service. A renowned Middle East expert, he has been deputy national intelligence officer for the Near East and South Asia. Grenier organized the CIA'...

More about Robert L. Grenier
88 Days to Kandahar
Copy and paste the code into your website.
New here? Learn how to read digital books for free