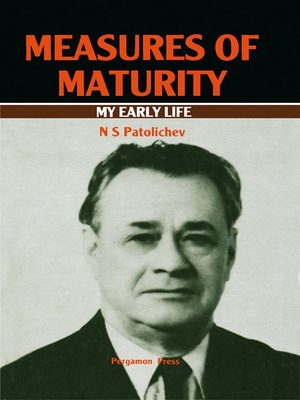 View more libraries...
Measures of Maturity: My Early Life focuses on the life journey of N.S. Patolichev, including his experiences in childhood and involvement in the labor sector and the military.
The book first highlights the accomplishments of the father of N.S. Patolichev during the Civil War. The text then offers information on the childhood of Patolichev, taking into consideration the harsh realities of poor peasant life that straddled his family. Patolichev particularly highlights the role of horses in alleviating the standard of living of people in his village during that time.
The manuscript describes the life of Patolichev when he worked at a chemical plant. He said that working at the plant gave him and his companions their first essential experience in life. Patolichev narrates his experience when he was asked to take the position of Central Committee assistant. The text also underscores his feats during the war, taking into consideration the setbacks that the war brought to nations. Patolichev also describes his experience when he was appointed first secretary of the Chelyabinsk Regional and City Party Committee.
The book is a fine reference for readers and war enthusiasts interested in life of N.S. Patolichev.