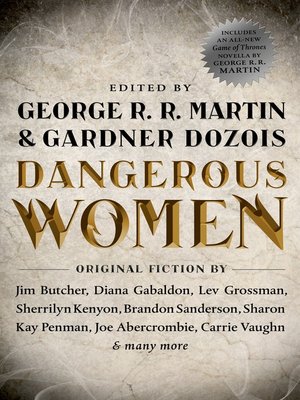 All new and original to this volume, the 21 stories in Dangerous Women include work by twelve New York Times bestsellers, and seven stories set in the authors' bestselling continuities-including a new "Outlander" story by Diana Gabaldon, a tale of Harry Dresden's world by Jim Butcher, a story from Lev Grossman set in the world of The Magicians, and a 35,000-word novella by George R. R. Martin about the Dance of the Dragons, the vast civil war that tore Westeros apart nearly two centuries before the events of A Game of Thrones.

Writes Gardner Dozois in his Introduction, "Here you'll find no hapless victims who stand by whimpering in dread while the male hero fights the monster or clashes swords with the villain, and if you want to tie these women to the railroad tracks, you'll find you have a real fight on your hands. Instead, you will find sword-wielding women warriors, intrepid women fighter pilots and far-ranging spacewomen, deadly female serial killers, formidable female superheroes, sly and seductive femmes fatale, female wizards, hard-living Bad Girls, female bandits and rebels, embattled survivors in Post-Apocalyptic futures, female Private Investigators, stern female hanging judges, haughty queens who rule nations and whose jealousies and ambitions send thousands to grisly deaths, daring dragonriders, and many more."

Gardner Dozois (1947-2018), one of the most acclaimed editors in science-fiction, has won the Hugo Award for Best Editor 15 times. He was the editor of Asimov's Science Fiction Magazine for 20 years. He is the editor of The Year's Best Science Fic...

George R.R. Martin has been a full-time writer for over 25 years. He is the author of the acclaimed, internationally bestselling fantasy series A Song of Ice and Fire, which is the basis of HBO's popular Game of Thrones television series. Martin h...

More about George R. R. Martin
Dangerous Women
Copy and paste the code into your website.
New here? Learn how to read digital books for free