audiobook (Unabridged) ∣ Basic Errors in Modern Thought--How They Came about, Their Consequences, and How to Avoid Them 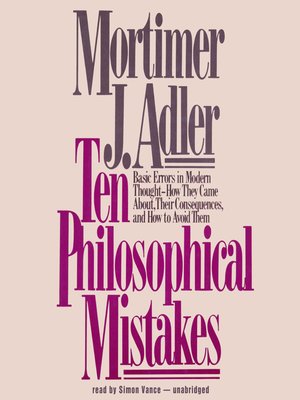 In this delightfully lucid and accessible book, America's foremost philosopher, Mortimer J. Adler, explores ten errors in the development of modern thought and examines the serious consequences they have in our everyday lives. Some of these mistakes include: (1) The mistake of identifying happiness with a good time rather than with that which is good for us; (2) The failure to differentiate between the perceptual and the conceptual realms of thought, by which the human mind is distinguished from the animal mind; and (3) The failure to acknowledge free will, which leads to the rejection of moral responsibility. Adler feels it is not too late to reverse the tide of escalating misconceptions and learn to live richer and happier lives. It is only unfortunate that in modern times, he says, "Much has been lost that might have been avoided if ancient truths had been preserved."