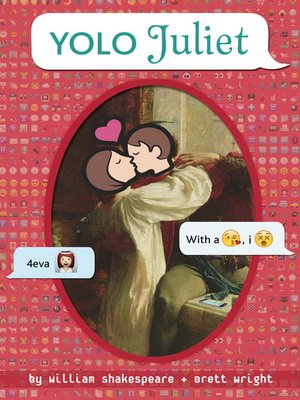 Classic LiteratureRomanceHumor (Fiction)Young Adult Fiction
Romeo and Juliet, one of the greatest love stories ever told . . . in texts?!

Imagine: What if those star-crossed lovers Romeo and Juliet had smartphones? A classic is reborn in this fun and funny adaptation of one of Shakespeare's most famous plays!

Two families at war.
A boy and a girl in love.
A secret marriage gone oh-so-wrong.

<3 and h8. The classics just got a whole lot more interesting. ;)


tl;dr A Shakespeare play told through its characters texting with emojis, checking in at certain locations, and updating their relationship statuses. The perfect gift for hip theater lovers and teens.

A glossary and cast of characters are included for those who need it. For example: tl;dr means too long; didn't read.
Classic LiteratureRomanceHumor (Fiction)Young Adult Fiction

BRETT WRIGHT holds a BFA in creative writing and works full-time as a children's book editor in New York City. In college, he studied Shakespearean tragedy, which was sadly lacking in emoticons. His greatest love affair has been with pizza. WILL...

More about William Shakespeare
YOLO Juliet
Copy and paste the code into your website.
New here? Learn how to read digital books for free