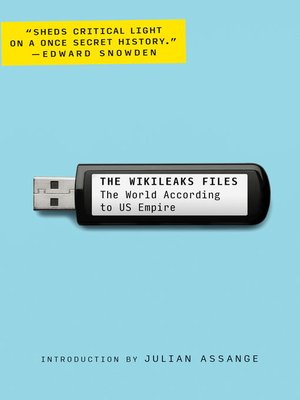 The World According to U.S. Empire

PoliticsSociologyNonfiction
What Cablegate tells us about the reach and ambitions of US Empire. Published in collaboration with WikiLeaks.
WikiLeaks came to prominence in 2010 with the release of 251,287 top-secret State Department cables, which revealed to the world what the US government really thinks about national leaders, friendly dictators, and supposed allies. It brought to the surface the dark truths of crimes committed in our name: human rights violations, covert operations, and cover-ups.
The WikiLeaks Files exposes the machinations of the United States as it imposes a new form of imperialism on the world, one founded on tactics from torture to military action, to trade deals and "soft power," in the perpetual pursuit of expanding influence. The book also includes an introduction by Julian Assange examining the ongoing debates about freedom of information, international surveillance, and justice.
An introduction by Julian Assange—writing on the subject for the first time—exposes the ongoing debates about freedom of information, international surveillance, and justice.
With contributions by Dan Beeton, Phyllis Bennis, Michael Busch, Peter Certo, Conn Hallinan, Sarah Harrison, Richard Heydarian, Dahr Jamail, Jake Johnston, Alexander Main, Robert Naiman, Francis Njubi Nesbitt, Linda Pearson, Gareth Porter, Tim Shorrock, Russ Wellen, and Stephen Zunes.
From the Trade Paperback edition.
PoliticsSociologyNonfiction

Julian Assange has been the Editor-in-Chief of WikiLeaks since 2006. Since 2010 when the website published thousands of US military and diplomatic documents, he has been under investigation by the United States. That year he was called a "criminal...

More about WikiLeaks
The Wikileaks Files
Copy and paste the code into your website.
New here? Learn how to read digital books for free