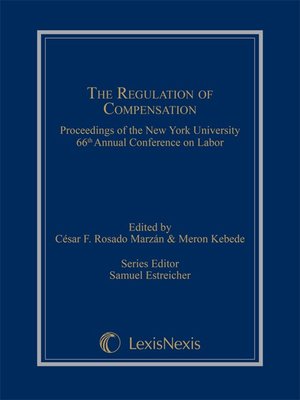 The Regulation of Compensation

This product gathers the insight and analysis from leaders in the field of labor and employment law. It is the culmination of efforts by top government officials and leading attorneys in the fields of labor and employment law who participated and presented papers and law essays at New York University Law School's Annual Conference on Labor on June 6-7, 2013. Its leading theme was the regulation of compensation 75 years after the landmark Federal minimum wage law, the Fair Labor Standards Act ("FLSA"), was passed by Congress. As these pages will show, the FLSA remains a central pillar of compensation regulation in the United States, even if the country is no longer the same as it was during the Great Depression, when the FLSA was enacted. This publication will thus serve as a useful resource to practitioners engaged in the cutting-edge issues pertaining to the regulation of compensation. This volume includes sixteen chapters which are arranged in six parts. Part One features a discussion of the need to reform the FLSA. Part Two features FLSA's substantive issues related to the FLSA. Part Three features litigation and settlement of FLSA claims. Part Four features emerging pay issues in the United States. Part Five features discussion of emerging benefits issues in the United States. Part Six features a discussion of emerging pay issues abroad. The eBook versions of this title feature links to Lexis Advance for further legal research options.

The Regulation of Compensation
Copy and paste the code into your website.
New here? Learn how to read digital books for free