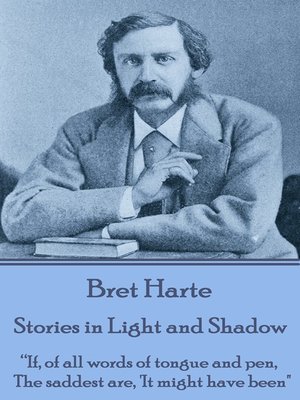 Stories in Light and Shadow

Francis Bret Harte was born on August 25, 1836 in Albany New York. As a young boy Harte developed an early love of books and reading. He first published at the tender age of 11; a satirical poem titled "Autumn Musings." Expecting praise he encountered anything but and was later to write "Such a shock was their ridicule to me that I wonder that I ever wrote another line of verse." By age 13 his formal education was at an end and four years later, in 1853, the family moved to California. Here the young man worked in a variety of capacities; miner, teacher, messenger, and journalist. But it was also here on the West coast that he found the stories and inspiration for the works that would endure his fame across the literary world. He championed the early writings of Mark Twain. He was instrumental in propelling the short story genre forward and brought tales of the Old West and the Gold Rush to a greater audience. At the height of his fame we would entertain staggering monetary offers to write for monthly magazines. His talents extended to poetry, plays, lectures, book reviews, editorials, and magazine sketches. As he moved location initially further east to New York and then through Consular appointments to Europe and finally to settle in England his audience diminished but he continued to experiment, to write and to publish. Bret Harte died of throat cancer on May 5th 1902 and is buried in St Peter's Church in Frimley, Surrey, England. Here we publish another very fine collection of his short stories; "Stories in Light and Shadow".

Stories in Light and Shadow
Copy and paste the code into your website.
New here? Learn how to read digital books for free