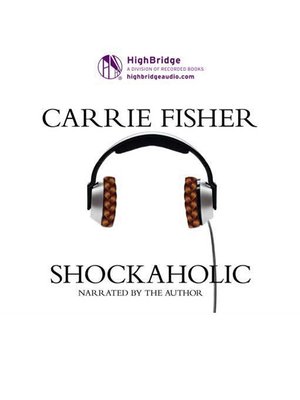 Bad news ... ... for anyone who thought Carrie Fisher had finally stopped talking about herself: Sorry, but after all of her seemingly endless blathering on about her nosebleed, high-class problems, it appears she has yet another brand-new problem to overshare about (though don't expect to relate to it). This time, the electro-convulsive shock therapy she's been regularly undergoing is threatening to wipe out (what's left of) her memory. But get ready for a shock of your own. Not only doesn't she mind paying the second electric bill, but she loves the high-voltage treatments. In fact, she gets a real charge out of them. She can't get enough. In fact, this might even be a brand-new addiction for her. But before she can truly commit herself to it in the long term, she'd better get some of those more nagging memories of hers on paper. It's been a roller coaster of a few years for Carrie since her Tony- and Emmy-nominated, one-woman Broadway show and New York Times bestselling book Wishful Drinking. She not only lost her beloved father, but also her once-upon-a-very-brief-time stepmother, Elizabeth Taylor. And as if all that weren't enough, she also managed to lose over forty pounds of unwanted flesh—not by sawing off a leg (though that did cross her zapped mind) but by doing what might be termed "wishful shrinking," all the while staying sober and sane-ish. And she wants to tell you, dear reader, all about it ... and more. Why? Because she wants you to someday be able to remind her about how Elizabeth Taylor settles a score and the scatological wonders of shoe tycoons. She doesn't want to forget about how she and Michael Jackson became friends or how she ended up sparring with none other than Ted Kennedy on a dinner date. And she especially wants to preserve her memories of Eddie Fisher—what their relationship really was and the beautiful story it turned out to be in the end. Yes, of course, Shockaholic is laugh-out-loud funny, acerbic, and witty as hell. But it also reveals a new side of Carrie Fisher that may even bring a pleasant shock your way: it is contemplative, vulnerable, and ultimately quite tender.