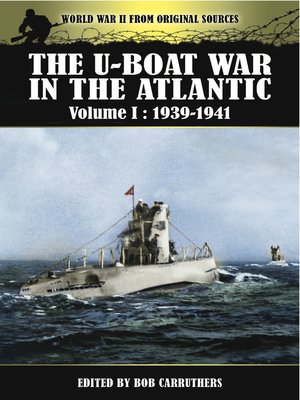 First in the trilogy that covers WWII submarine warfare in the Atlantic from the German perspective—edited by theEmmy Award-winning historian and author.

The U-Boat war is a unique visual record of Hitler's infamous submarine fleet and a grim account of those that lived, worked and risked their lives stalking the depths of the Atlantic and Mediterranean seas. This book analyzes the development of the U-boat, the recruitment and training, and reveals how the crews tried to destroy essential Allied supplies across the Atlantic and bring Britain to its knees.

Using some 250 rare and unpublished photographs together with detailed captions and accompanying text, the book provides an outstanding insight into the various operations and the claustrophobic existence of the crew, where they lived in cramped and often deplorable conditions. It depicts how this potent force became one of the most dominant German fighting units during World War Two and became such a worry to Allied shipping that even Winston Churchill himself claimed that the "U-boat peril" was the only thing that ever really frightened him during the war. On their defeat hung the outcome of the war, and through courageous and determined resistance against overwhelming odds, the Allies eventually inflicted such catastrophic damage on the U-boats that the losses were too great to continue. Of the 38,000 men that went to sea onboard these deadly vessels, only 8,000 were to survive to tell the tale.

History Military Nonfiction
The U-Boat War in the Atlantic, 1939–1941
New here? Learn how to read digital books for free