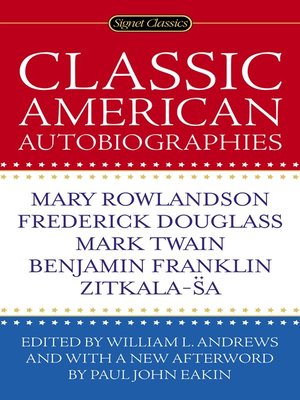 Biography & AutobiographyHistoryLiterary CriticismNonfiction
The true diversity of the American experience comes to life in this superlative collection of autobiographies—including those of Benjamin Franklin, Frederick Douglas, Mark Twain, and more...
A True History of the Captivity and Restoration of Mrs. Mary Rowlandson (1682), perhaps the first American bestseller, recounts this thirty-nine-year-old woman's harrowing months as the captive of Narragansett Indians.
The Autobiography of Benjamin Franklin (1771–1789), the most famous of all American autobiographies, gives a lively portrait of a chandler's son who became a scientist, inventor, educator, diplomat, humorist—and a Founding Father of this land.
Narrative of the Life of Frederick Douglass (1845), the gripping slave narrative that helped change the course of American history, reveals the true nature of the black experience in slavery.
Old Times on the Mississippi (1875), Mark Twain's unforgettable account of a riverboat pilot's life, established his signature style and shows us the metamorphosis of a man into a writer.
Four Autobiographical Narratives (1900–1902), published in the Atlantic Monthly by Zitkala-Sa (Red Bird), also known as Gertrude Bonnin, provide us with a voice too seldom heard: a Native American woman fighting for her culture in the white man's world.
Edited and with an Introduction by William L. Andrews
and an Afterword by Paul John Eakin
Biography & AutobiographyHistoryLiterary CriticismNonfiction

Classic American Autobiographies
Copy and paste the code into your website.
New here? Learn how to read digital books for free