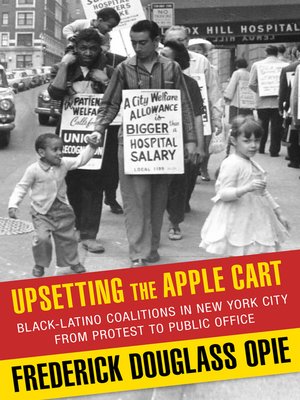 Upsetting the Apple Cart surveys the history of black-Latino coalitions in New York City from 1959 to 1989. In those years, African American and Latino Progressives organized, mobilized, and transformed neighborhoods, workplaces, university campuses, and representative government in the nation's urban capital.

Upsetting the Apple Cart makes new contributions to our understanding of protest movements and strikes in the 1960s and 1970s and reveals the little-known role of left-of-center organizations in New York City politics as well as the influence of Jesse Jackson's 1984 and 1988 presidential campaigns on city elections. Frederick Douglass Opie provides a social history of black and Latino working-class collaboration in shared living and work spaces and exposes racist suspicion and divisive jockeying among elites in political clubs and anti-poverty programs. He ultimately offers a different interpretation of the story of the labor, student, civil rights, and Black Power movements than has been traditionally told. His work highlights both the largely unknown agents of historic change in the city and the noted politicians, political strategists, and union leaders whose careers were built on this history. Also, as Napoleon said, "An army marches on its stomach," and Opie's history equally delves into the role that food plays in social movements, with representative recipes from the American South and the Caribbean included throughout.

Frederick Douglass Opie is a professor of history and foodways at Babson College. He is the author of Hog and Hominy: Soul Food from Africa to America and Black Labor Migration in Caribbean Guatemala, 1882—1923, and the editor of the

More about Frederick Douglass Opie
Upsetting the Apple Cart
Copy and paste the code into your website.
New here? Learn how to read digital books for free